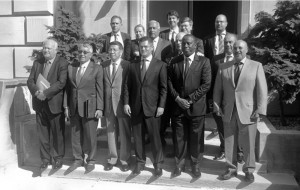 Achieving sustainable development will be the overriding challenge of this century. Throughout most of history, the challenges of integrating economic development, social inclusion, and environmental sustainability were local or regional. In the 21st century, however, they are indisputably global. Only through global cooperation can individual nations overcome the interconnected crises of extreme poverty, economic instability, social inequality, and environmental degradation.

In the Age of Sustainable Development, the United Nations will be more essential than ever. As foreseen in the UN Charter, the UN General Assembly is the world’s meeting ground for global cooperation, and UN agencies have specialized knowledge of essential global importance. Yet the UN will have to be organized to succeed in this unprecedented challenge, to ensure much higher levels of accountability, timeliness, efficiency, and political commitment of the Member States and the UN itself. The proposal made at the Rio+20 Summit for a new High-Level Political Forum (HLPF) led by Heads of State and Government to oversee the UN’s new mandate in sustainable development is, in this regard, a critical starting point.

The crises of sustainable development have already become crises of national and global security. Every country faces increasingly complex challenges of energy, food, and water security. Every country faces the crisis of rising frequency and intensity natural disasters, with a soaring number of floods, droughts, heat waves, extreme storms, and forest fires. Every country faces the unsolved problems of jobs for its young people, and many poor countries have populations growing too fast to meet the needs of education and jobs. Many of the world’s conflicts—in the Sahel, the Horn of Africa, Syria, and Western Asia—are being stoked by droughts, famines, mass migration, and other symptoms of economic, social, and environmental unsustainability.

This is no time for despair, but for resolve. The United Nations must be the vital center of the sustainable development effort, one that draws on every stakeholder: private businesses, non-governmental organizations, universities and research centers, international financial institutions, and the UN organs themselves.

At the 2012 Rio+20 Summit, world leaders charged the UN General Assembly with three key missions: to define Sustainable Development Goals (SDGs), to identify the financial means for their fulfillment, and to identify the needed inter-governmental machinery in the UNGA and ECOSOC for the implementation and monitoring of the SDGs. The practical UN problem—a challenge of historic dimension—is how to support countries at various levels of economic development to work together to end extreme poverty, transition to a low-carbon world energy system, ensure food and water security, reduce high fertility rates, and make the world’s cities productive and resilient to environmental stresses. The SDGs need to create a new era of change, rooted in global solidarity, optimism, and the sense that humanity can solve the many difficult problems of a crowded and environmentally stressed planet.

The Millennium Development Goals (MDGs) illustrate how global goals can promote change. The MDG process has included several highly effective UN initiatives to provide guidance, oversight, and monitoring of the MDG processes. In addition to the UN activities, the MDGs have spurred dozens of major initiatives around the world by donor governments, leading NGOs, the G8, the G20, major foundations, and ad hoc coalitions of countries. Progress in many areas was accelerated after the year 2000, and the coherence of development efforts was enhanced. The overarching lesson is that global development goals can indeed help to organize, motivate, mobilize, and even inspire the international community to accelerated action.

In addition to the SDGs, the Rio+20 Summit rightly underscored the need for creative approaches to global financing for sustainable development. This is a complex topic, and one that is now being considered by a special Intergovernmental Committee of Experts on Sustainable Development Financing mandated by the Rio+20 Summit in The Future We Want. Development assistance will continue to be vital, but so too will innovative public-private partnerships to mobilize large-scale financing, for example to provide for sustainable energy and urban infrastructure.

Sustainable development will also require the leadership of the world’s multinational corporations, which are the most powerful actors in the global scene. One can say that they constitute the foundation of the new globalization. Global companies have a reach and power that dwarfs that of most nation states. Their economic might is reflected in their political influence, their ability to sway national and global regulations, and their potential to speed or hinder the technological and policy transitions to sustainable development. The enlightened members of the global business community understand the stakes and are prepared to lead.

The success of the SDGs will depend on much greater UN coherence and accountability. The UN Secretary General should be tasked with the overall guidance of the UN’s sustainable development agenda, including the process of making strategic recommendations to Member States, overseeing the monitoring and evaluation of processes in place, and mobilizing the requisite cooperation of the UN agencies. The UN General Assembly has the mandate to agree on the SDGs, set an overall strategy, adopt milestones and timetables for the period to 2030, monitor annual progress, and make periodic recommendations on needed course corrections. This vital agenda calls for nothing short of the revitalization of the General Assembly as the unique venue for international cooperation at the highest levels for economic, social, and environmental matters.

The High-Level Political Forum (HLPF) will bring the SDGs to the highest political level and focus. The HLPF will organize quadrennial summits of Heads of State and Government around the SDGs. Annual meetings of the HLPF, under the Chairmanship of ECOSOC, and mainly at ministerial level, will enable governments to weigh in on the progress and challenges of achieving the SDGs.

The UNGA would also establish several standing committees to oversee progress on the SDGs and the major means of implementation. These would also present reports and make recommendations for corrective or accelerated action by the UNGA including the establishment of a ranking system of SDG progress, in addition to conducting reviews of the compliance of the work of various branches and agencies of the UN System to the post-2015 agenda as set by Member States. Such a mechanism would heighten their accountability to the membership. In order to secure the requisite political backing of Heads of State or Government, these committees should be chaired by their peers, namely Heads of State or Government of countries chosen for the task.

A crucial pillar for UNGA leadership will be an effective bridge with the G20, the current forum for the world’s major economies and with the international financial institutions, including the Bretton Woods institutions and the multilateral development banks. The UN should form a strong consultative process with the world’s finance ministers. Another crucial pillar will be a bridge to state-of-the-art scientific knowledge on sustainable development, both for guiding the work program of the UN, and for advising Member States on best practices and building local capacities. In this regard, the new UN Sustainable Development Solutions Network (SDSN) should play a key role. The SDG agenda should also be incorporated into the work programs of other UN bodies usually considered to be outside of the main mandates of sustainable development.

There is a short window until 2015. The world faces the need for important and specific decisions to be taken on a tight timetable. These include agreement on the overall SDG framework by 2015; agreement on the roles of the HLPF and ECOSOC, and agreement on the mechanisms of the UNGA standing committees; and the incorporation of the Sustainable Development Solutions Network into the work program of the UNGA and HLPF.

We also invite UN Member States to consider adopting a Universal Declaration of Sustainable Development, incorporating the SDGs but affirming their centrality by putting the sustainable development agenda on the highest plane of urgency.

The SDGs therefore have a special role to play not only in guiding the work of the global community, but also creating awareness in the global public. Their force, ultimately, will come from public acceptance, and from public recognition of the urgent need to change how we live, work, and use natural resources. Most importantly, the SDGs must help the world to understand, and feel, the many reasons for optimism.

The world can coalesce around a common agenda. The wonders of modern science and technology, the history of positive cooperation with the MDGs and other initiatives, and our generation’s opportunity to forge a shared commitment for human betterment, all are reasons to redouble our efforts. Our common fate and our generation’s place in the great moral chain of humanity call us to action.

This document was elaborated the 9th of September 2013 by the Office of the President of the General Assembly.
The High-Level Advisory Panel directed by H.E. Mr. Vuk Jeremić and Dr. Jeffrey Sachs